The movie "One Cut of The Dead” (Kamera o Tomeru na!) is a unique "zombie comedy" indie film that was released in 2017 in Japan. It was produced with a budget of only JPY3million (USD27,000) and initially screened in only two theaters, but its reputation slowly spread and it won numerous awards! The film was highly acclaimed overseas, and made box office history by earning 1,000 times its budget. In addition, a remake, titled "Final Cut", has been produced in France.

The location of the hit movie "One Cut of the Dead" was filmed mainly in Japan's Kanto region, including Saitama Prefecture. It is an outstanding film that uses neither famous actors nor famous spots, but is still extremely entertaining. In this article, we will introduce sightseeing spots and gourmet food in Kawaguchi City, Saitama Prefecture and Mito City, Ibaraki Prefecture, the two main filming locations. Get ready for a "zombie" tour of Japan!

A film crew is shooting a zombie movie in an abandoned water filtration plant deep in the mountains. However, the building  is said to be a facility where the Japanese military experimented with reanimating corpses before the war...

The actors do take after take, but the director is unhappy with their performances and orders a break. When the staff return from their break, they find that something is very wrong. It seems that the staff has turned into real zombies! Despite the situation, the director does not stop filming, as he sees this as his chance for success. The filming continues while the zombies attack the cast and crew.

Please enjoy this film's surprising plot and the actors' performances. Keep an eye out for the 37-minute long continuous take, as it's very impressive.

Almost the entire cast was chosen by audition. Some of the actors auditioned because they wanted to have their names in the end roll, and made their debut in this film as complete amateurs.

Let's take a tour of the locations of "One Cut of The Dead".

The former Ashizan Water Treatment Plant is an abandoned building where the director and his film crew had a zombie fight. It was in use until 1993.

With its discolored walls and large echoing chambers, it certainly looks like a zombie-infested place...the entrance also looks abandoned.

The city of Mito in Ibaraki Prefecture is a popular filming location and welcome movie lovers. However, this facility is closed to the public for preservation.

There are a number of filming locations within the premises of SKIP City, a large complex complete with a science museum, visual technology museum, and planetarium. (Sai-no-kuni Visual Plaza).

Grand staircase next to the Sai-No-Kuni Visual Plaza

The grand staircase next to the Sai-No-Kuni Visual Plaza was used for the scene where the director's daughter, Mao, was shooting V-Cinema as an assistant director.

Studio 301 at the Movie Museum

Studio 301 at the Museum of the Moving Image was used for the TV station scene! In contrast to the tense zombie scene, this scene is a loose exchange of ideas.

District B, lined with lots of trees.

The "B district" lined with lots of trees, seems to the setting of a scene where the actors are practicing.

Sights and Tours around Kawaguchi

Kawaguchi City is considered to be a Tokyo "suburb" City, it is small but features plenty of charming sites for sightseeing. Below we will introduce two tourist spots, a big park which highlights some of Japan's natural beauty, and an Onsen Spa with uniquely rejuvenating waters.

Our first recommendation is the Kawaguchi Municipal Green Center, which shows different faces depending on the season. The park is lined with numerous facilities, and flowers bloom in every season. 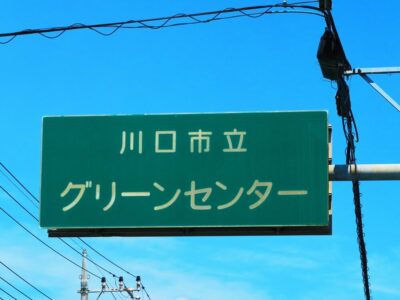 This is the symbolic main assembly hall. It's spacious inside, too! 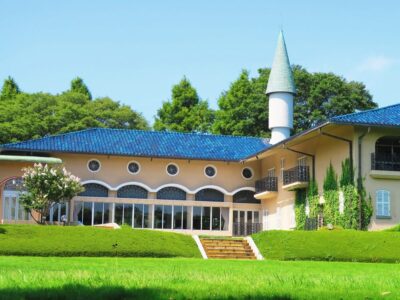 In the large park, there is a large fountain, a large greenhouse, a viewing platform, a miniature railroad where you can ride a small train, a children's plaza, and much more! There is even a bird center where you can see peacocks! In winter, the pool turns into an ice skating rink.

The facilities open to the public seem to change depending on the season, so be sure to check out the website!

The entrance fee is 310 yen for adults, and a whopping 100 yen for those aged 4 to high school. It is an inexpensive place to enjoy a beautiful day.

Sightseeing and jet lag are not a pretty combination, luckily Japan has great hot springs to refresh a tired body and mind. Let's take a look at Spa Royal Kawaguchi.

It's a spa with 13 kinds of hot springs and a bedrock bath where you can rest and relax! They are very particular about their hot water, and use "Kuroyu" (black hot water), a raw hot spring water drawn from 1300 meters underground.

In addition to hot springs and bedrock baths, there are relaxation facilities, an Asian style cafe, and a large tatami room where you can read 3000 different comics and magazines! Besides the hot springs, it's a place where you can relax and enjoy some food and comics.

Next, let's take a look at some gourmet food and local specialties in Kawaguchi City.

Saitama is said to be the second largest producer of udon noodle in Japan. This gourmet dish is a collaboration of such a specialty udon and a sauce developed jointly with Bulldog, a renowned Japanese sauce maker.

The name "Hatogaya" originally comes from the city of Hatogaya, but the name was lost after the city merged with Kawaguchi City.

Different restaurants have different arrangements, so it's a good idea to compare them!

This is a local ice cream only available in Kawaguchi, called "Julien ice cream".

The three flavors are made from Kawaguchi's specialty, Kinome Sansho (Japanese pepper), the symbol of Kawaguchi City's Yasuyuki area, and Kawaguchi-grown yuzu - which is a type of Japanese citrus. A true Kawaguchi gourmet! You can purchase these at the Kawaguchi Ryokka Center Jiriyasu, which is also a roadside station.

If you want to use transportation in Kawaguchi City, Saitama, renting a car or driving your own car is the best way to get around. If you find it difficult to get around by car, I recommend the Kokusai Kogyo bus service! These buses leave from Ikebukuro and other terminal stations in central Tokyo.

Here are the buses that go to the locations mentioned in this article.

Be careful not to forget to take your numbered ticket when you get on the bus, as many buses in Saitama Prefecture are postpaid.

"One Cut of the Dead" is a small indie comedy that took the world by storm. The enthusiasm of the film is well, infectious! The film also introduced the world to a lesser known city in Japan, Kawaguchi, which is considered one of the best places to live in Japan. It is a chance to enjoy local Japanese cuisine, like Udon and Yuzu ice cream, in an atmosphere far more relaxed than the one you'll find in busy neighbor Tokyo. It is a quaint, low-budget stop, to experience an authentic Japan.

Enjoy, and try to avoid the zombies!