Studio Ghibli's film "Kiki's Delivery Service" was released in 1989 in Japanese theaters. The film, depicts the journey and growth of Kiki, a 13-year-old witch who flies on a broomstick and has a talking black cat, Jiji, as her companion. It became the number one hit in the Japanese film ranking that year and won the Best Animated Film award at the 44th Mainichi film awards.

The movie is based on the children's book "Kiki's Delivery Service" by Eiko Kadono, however Miyazaki made a lot of changes to the original story due to the fact that the book lacked conflict.

The fictional country in the movie charmed viewers with its northern European aesthetic. Read on to find out about the locations from Sweden, the Scandinavian country which inspired Kiki's city.

Kiki, a young witch, has to leave her family home to live in a city across the sea, Koriko, as a right of passage to become an adult. She finds a new home with Osono, the owner of a bakery. In order to make a living, she uses a magic broom to make house calls and starts her own "delivery service". Accompanying Kiki on her adventures is her black talking cat, Jiji.

Hayao Miyazaki has stated that he wanted to portray the gulf between independence and reliance in teenage girls. As a result, a major theme of "Kiki's Delivery Service" is maturity. When Kiki loses confidence in her self, she loses access to her powers and the ability to talk to her sidekick, Jiji. It is only when she overcomes her doubts that she is able to become the witch she was meant to be.

The voice actress who plays Kiki is Minami Takayama, who is also known for her role as Conan Edogawa in "Detective Conan." Did you know that she played the double roles of Kiki and Ursula in the original Japanese version of "Kiki's Delivery Service"?

Minami, who was only 25 years old at the time, was chosen to play Ursula. However, the search for the role of Kiki was difficult, and Minami, who attended the audition, won the role of Kiki as well. As a result, there was no one to play Ursula, and she had to take on the huge responsibility of playing two roles. It's hard to believe that it's the same person playing both roles because each character's personality stands out so well!

Though there are many places around the world that are rumored to be locations that inspired "Kiki's Delivery Service", there are two places in Sweden that Miyazaki visited to create the fictional northern European country shown in the film.

Let's follow in Miyazaki's footsteps and explore Stockholm and Visby on the Swedish island, Gotland.

Stockholm, the capital of Sweden, is a large city with a population of about one million. Surrounded by water, the city is also known as the Venice of Northern Europe. 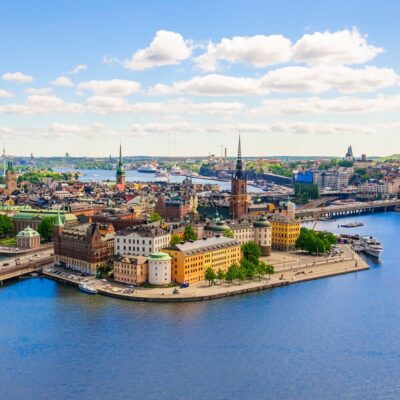 Stockholm is the model for the beautiful port city of Koriko, surrounded by the sea, which Kiki loved at first sight when she saw it from the sky after leaving her hometown. It is possible to get Kiki's bird's-eye view by visiting the Stockholm City Hall Tower. 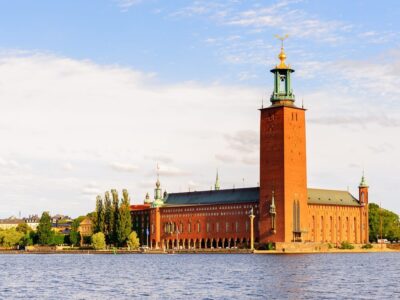 The City Hall Tower is 106 meters high with a total of 365 stairs leading up to the top floor. The observation deck sits 73 meters above sea level, and from here you can see the amazing city of Stockholm. In the film, Kiki swoops down from the sky and says, "I'll take this city! I'm going to choose this city!" Standing at the top of the City Hall Tower, it is easy to understand why Kiki chose Koriko to start her new life.

If you take a guided tour of Stockholm City Hall, you can see the Blue Room, where the Nobel Prize celebration dinner is held, and the Golden Room, where balls are held.

Stockholm City Hall - City Hall
Guided tours The City Hall can only be visited on guided tours. We monitor the covid-19 situation closely and continuously update our website in line with any n...

The Clock Tower of Stockholm Cathedral

Another not-to-be-missed location is the clock tower in the city of Koriko, which is the highlight of the last half of the movie. This clock tower is based on the Stockholm Cathedral in Gamla Stan, the old town of Stockholm.

Stockholm Cathedral, built in 1279, is the oldest church in Stockholm and a symbol of the city. It's also an important spot where the King of Sweden's wedding and coronation ceremonies are held, so it's a must-visit place. 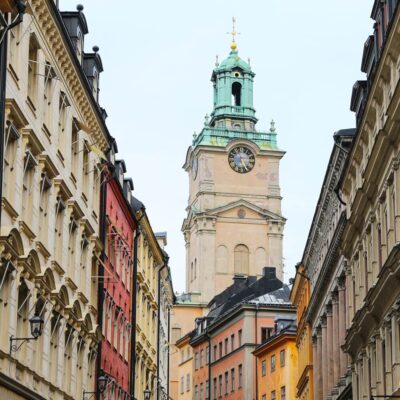 Gotland, Sweden's largest island in the Baltic Sea, can be reached in about three hours by ferry from the capital, Stockholm. The island's old town, Visby, has been registered as a World Heritage Site for its beautiful medieval streets. There are 13 ruins of churches built during the medieval period in the city, and visiting these ruins is one of the highlights of Visby.

From the heights of the Santa Maria Cathedral, the only surviving church in the old town, you can see the scenery where Kiki lived. There is a staircase on the cathedral grounds that leads up to the hill, and the view of the orange roofs and the blue sea from there is exactly the view from the Guchoki Bread Shop. You can see the whole city where Kiki and Jiji live. 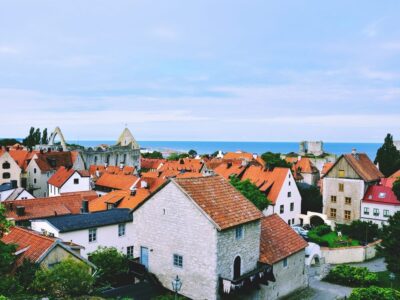 The Guchoki Bakery, the bakery where Kiki started her home delivery service, is also located here in Visby. It has a very cute exterior with reddish brown tiles, yellow walls, red eaves and wooden frame windows, and is now a general store.

If you are planning to travel to Japan, there is a place where you can be a magical girl just like Kiki!

At "Michi no Eki Shodoshima Olive Park" on Shodoshima Island in Kagawa Prefecture, an island in the Seto Inland Sea, you can rent a "magic broom that can turn anyone into Kiki" for free. Surrounded by an olive grove of about 2,000 trees, this roadside station park offers a beautiful contrast between the sky and the sea, reminiscent of a foreign country.

Sights and Tours Around Stockholm

In addition to the movie locations, there are many other things to see and do in Stockholm.

Drottningholm Palace is so beautiful that it is called the "Versailles of Northern Europe."

It is located on the island of Robben in the suburbs of Stockholm and is registered as a World Heritage Site. 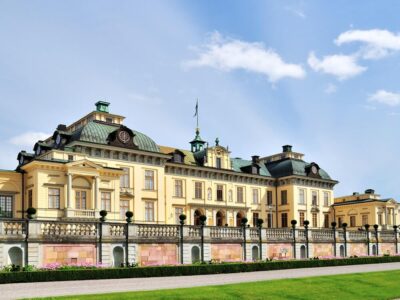 The Swedish king and his family still live here, and part of the palace interior and the park are open to the public. 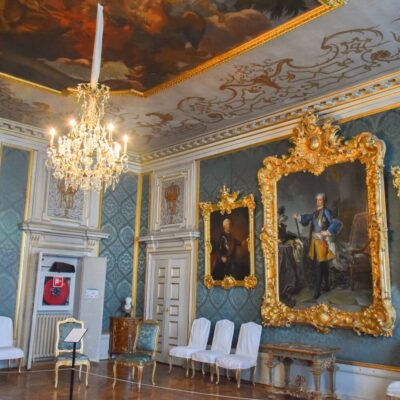 Even the resting place for the Kingsguard is as luxurious as a Disneyland attraction...! 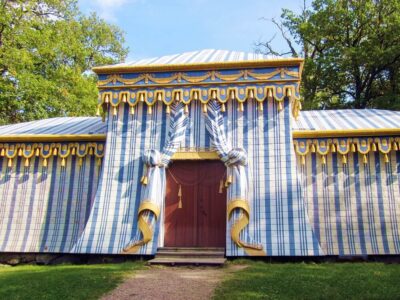 After a serious tour of the Royal Palace, we recommend trying a different type of museum and becoming a "Dancing Queen". Some of the most famous people from Sweden are the members of the legendary pop group, Abba. Stockholm is home to the Abba Museum, a unique museum dedicated to the group.

In addition to the display of items related to Abba, you can also experience karaoke in the recording booth, or sing and dance with Abba as the fifth member in a hologram of the four members on stage.

Shopping and eating are also important aspects of travel. Take a look at some of our recommendations for local food and souvenirs from Stockholm, Sweden and Shodoshima, Japan.

If you want to take a break from strolling around the palace, you can fill your stomach at Café Restaurant Karamellan.

Located next to Drottningholm Palace, this café has been around for over 100 years. This historical café serves a variety of food from light meals to Swedish cuisine. When the weather is nice, sit on the terrace and enjoy the view of the lake and park.

The Nobel Prize Museum, located in the old stock exchange building in the old city of Garamstan, has exhibits related to the Nobel Prize, as the name suggests. At the museum's café, you can enjoy the same sweets that were served at the year's Nobel Prize celebration dinner.

Don't be surprised if you see someone flipping over a chair in the café, as there are autographs of Nobel laureates on the backs of the chairs. Chocolates in the shape of Nobel Prize medals are popular as souvenirs.

Nobel Prize Museum
The Nobel Prize shows that ideas can change the world. The courage, creativity and perseverance of the Nobel Laureates inspire us and give us hope for the futur...

"Kiki's Delivery Service" was made into a live-action movie in 2014. The set of the Guchoki Bakery that appeared in the movie was reborn as a general store after the filming was finished, and this is Zakka Corico.

As a former location set, the interior of the store is very cute, just as it was in the world of the movie. Handmade accessories made with flowers are especially popular.

The main public transportation in Stockholm is the subway, bus, streetcar, and water bus, all of which are operated by the same company, SL.

Shodoshima in the Seto Inland Sea can be accessed by ferry from Takamatsu, Himeji, and Okayama.

Kiki's attic room didn't start out very charming, but it certainly ended up that way after she decorated it and made it her own. It is possible to stay in Kiki's room by heading to Tasmania, Australia.

The bakery has been in business for more than 100 years, and the store is filled with delicious looking breads and danishes. Next to the bakery is the Ross Bakery Inn, where you can book the popular Kiki's Room.

"Kiki's Delivery Service" is a movie that resonated with so many people, as we have all struggled with the loneliness and difficulties of growing up. We hope that you are able to relive that Ghibli magic you felt while watching the movie by visiting these locations in Sweden and Japan. Happy travels!

10 Burning Questions of Spirited Away: What is No Face? Who is Haku?

Studio Ghibli's "Spirited Away"("Sen to Chihiro no Kamikakushi") is a coming of age tale, with a twist. The film's heroi...

Studio Ghibli released "Ponyo" in 2008, and it went on to be the fifth-highest-grossing anime film of all time, likely d...

"Laputa: Castle in the Sky," released in 1986, is the first full-length animated film released to the world by Studio Gh...

"Howl's Moving Castle" was released in 2004 by Studio Ghibli and Hayao Miyazaki. The movie is based on a book with the s...
Don't Miss the Locations of Indie Film "One Cut of The Dead” in Saitama, Japan!
Visit Higashi-Murayama, Tokyo; The Cherry Blossom Paradise From "Sweet Bean"